Medicaid, Cloud and Large-Scale IT Modernization 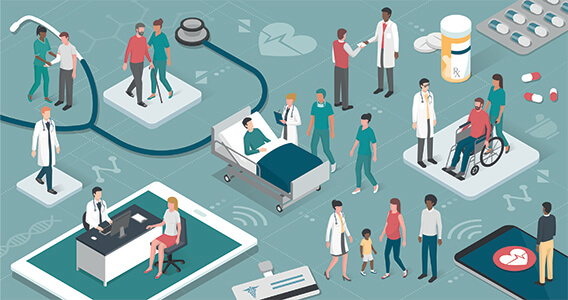 Washington’s decision to deliver major health care benefits using cloud computing shows why it is critical for large-scale IT modernization, according to two technology experts.

“The mission of Medicaid agencies isn’t to deliver technology,” John Harding said during a GovLoop online training on Thursday. “It’s to deliver services. The more we can make IT services more efficient, the more dollars can be spent on the true goal of benefits delivery.”

Created by the federal government in 1965, Medicaid now ensures tens of millions of citizens can afford health care benefits despite having limited income and resources.

Medicaid now helps states provide health care to people with income and resources below a certain level, making administering it a key focus of government IT offices nationwide.

According to Harding, legacy MMIS networks are struggling to quickly comply with federal regulations and security standards for Medicaid systems.

“If you spend five to seven years to build a system, the regulations have changed, and the compliance has changed,” he said. “When you have legacy technology, you find yourself really behind the curve to keep up with those mandates. They’re coming fast and furious over the last few years.”

According to Casey Burns, Health and Human Services Leader at Amazon Web Services (AWS), cloud could offer a solution to these MMIS problems. AWS is an on-demand cloud computing platform provider.

“Cloud is a key technology for deploying the kind of speed and agility that organizations are looking to leverage here,” he said. “It’s to increase the pace at which we can innovate. At the same time, we’re creating lean, usable data. A lot of that is difficult with the technologies that are in place in a lot of legacy environments.”

Harding said that in Washington’s case, one of the immediate benefits from migrating their MMIS IT to cloud was saving energy and time that was formerly spent maintaining legacy systems.

“It frees you up from a lot of things you have to think about with data storage, hardware and data storage,” he said. “It allows the state to focus on the policy and the program. It has removed a lot of mundane tasks that are there every day in an on-prem environment.”

Harding said that agencies considering adopting cloud like HCA should think about procuring, securing and preparing the technology for their workforce.

“It’s really important that when you are undertaking a cloud migration that you plan it very well,” he said. “Communication and collaboration are essential. It’s having that tight-knit team between the healthcare agency, the IT agency and your partners.”

Public cloud services are delivered over a publicly accessible network, and HCA is now using its version to provide Medicaid benefits cheaper, quicker and with more flexibility.

“All of these journeys begin with small steps,” Burns said of cloud adoption. “It will hopefully enable organizations to move faster. Technology should support that new way of working and not hinder it.”