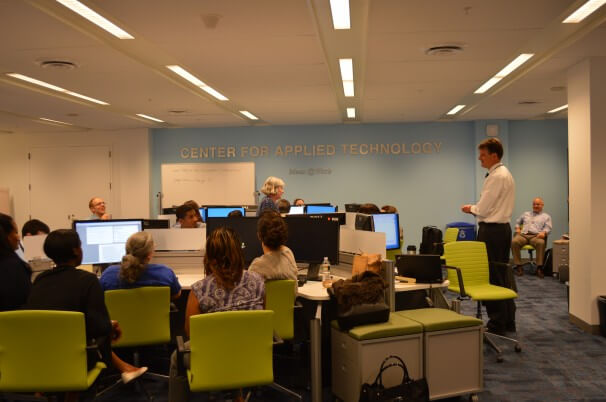 The U.S. Census Bureau is the country’s original aggregator of big data, gathering statistics that are used to define legislative districts, make decisions about where to build new roads and schools and allocate money for public health resources.

The agency is tasked with collecting data sets on the nation’s population, housing and various economic indicators, providing reports that inform a range of government agencies and public work.

Its mission – to serve as the leading source of quality data about the nation’s people and economy – while clear, is not simple. With that much data on hand, there is a constant need to assess if the information the U.S. Census holds is reaching its full potential.

Recently, the federal agency tapped CNSI to develop and maintain a Center for Applied Technology, or CAT Lab, which serves as a central incubator for the development of ideas across the agency’s departments.

Utilizing virtual servers and multiple desktop workstations arranged in pods of six, the CAT Lab encourages collaboration between working groups, bringing participation opportunity to a new level. Census Bureau developers can leverage each other’s expertise in the CAT Lab to brainstorm new ideas, discern what works and then apply that knowledge right then and there using advanced computing systems.

The Washington Post recently featured the CAT Lab in an article for the publication’s ON I.T. column, Census Bureau creates its own slice of Silicon Valley, highlighting that technology specialists use the space to test new software on different devices in an environment designed to stir creativity. The article notes that in the lab, bureau employees use publicly available “open” data to create apps and software.